Against the Wind lyrics

The game is in their hands
Calling out the colour
Togetherness, their courage
Recognize the power
Make a stand before them
Old ways follows the beaten track
Against the wind
Against the wind

The game is in your hands
Reach for every moment
In rising generations
Capturing the change
Make a stand before them
Old ways follows the beaten track
Against the wind... 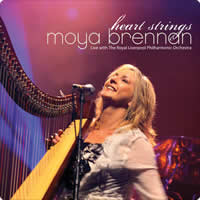 Brief: The song was Moya's first solo single taken from her album Maire which was released in 1992. It also appears on her live album, Oro - A Live Session released in 2005 and on her Heart Strings album released in 2008 (pictured).

Moya Brennan: Born Máire Ní Bhraonáin (Maire Brennan) on August 4, 1952. She is a foundation member of the famous Irish family band - Clannad, and is the older sister of Enya and Bridin Brennan.

Back to Irish Lyrics - A