They long to return to the banks of the Lena
The Roe and its branches on every side
Where there lies brave Cooey, that once mighty chieftain
Who once 'gainst the Saxon defended with pride

Her daughters are fair and her sons they are gallant
They scorn the tyrant, the serf, or the slave
Their rights they maintain at the point of the bayonet
With an arm that is strong and a heart that is brave

In an abbey not far from the town of Dungiven
Their spirit hovers over that once much loved soil
Where there lies brave Cooey, that once mighty chieftain
Who commanded of yore from the Bann to the Foyle

Long may she prosper 'neath her sheltering mountains
Carntogher, Benbradagh and surrounding hills
From calamity and famine, great heaven defend them
And grant them contentment 'neath their clear purling rill 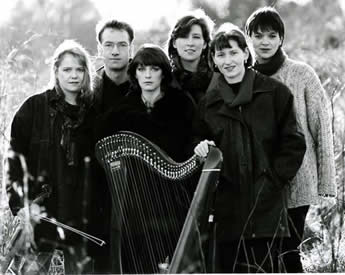 Author: Manus O'Kane - a school master from the area around Dungiven.

Brief: A song about the love of ones country or region, in this case Benedy Glen near Dungiven. For all who leave, they long to return to her heather clad mountains and clear crystal fountains. It has endured a long and arduous history, but her arm is strong and her heart is brave. She will endure and prosper through calamity and famine and remain contented forevermore.

References:
The Benedy Glen - lies among the Sperrin Mountains along the Glenshane Pass near the town of Dungiven on the main Belfast to Derry road.
Dungiven - a small town in County Londonderry (Derry), Northern Ireland.
Cooey - Cooey-na-Gael was the great chieftain of the O’Cahan Clan in Ulster, a province of Ireland.
Bann - The River Bann - the longest river in Northern Ireland,
Foyle - The River Foyle - 10 miles (16 km) long, formed by the junction of the Mourne and Finn rivers at Strabane, which is on the border between Limavady and Derry districts, W Northern Ireland.
Carntogher - a mountain overlooking a small rural community in the Sleacht Néill area, just outside Maghera, Co. Derry.
Benbradagh - a mountain in Co. Derry, Northern Ireland. It is the second most northerly summit in the Sperrin Mountains area.
mouldering - to crumble or cause to crumble, as through decay
purling - flowing or rippling with a murmuring sound.
rill - brook, stream or small river

Déanta: Irish band from Northern Ireland that play traditional music. The name of the band, 'Deanta' is the Irish word for 'done' or 'made'. The band formed in the late 1980s in County Antrim and played together until 1997 and regrouped in 2008. The original band members included Mary Dillon, Deirdre Havlin, Rosie Mulholland, Eoghan O'Brien, Kate O'Brien, and Clodagh Warnock... more.

The Benedy Glen by Deanta is featured on the album Ready For The Storm (Jan 1, 1994)

Back to Irish Lyrics - B