One evening of late as I rambled
On the banks of a clear purling stream
I sat down on a bed of primroses
And I gently fell into a dream
I dreamed I beheld a fair female
Her equal I had ne'er seen before
As she sighed for the wrongs of her country
As she strayed along Erin's green shore.

I went to her and I quickly addressed her
Fair maid, will you tell me your name?
And why through this wild wooded country
In the midst of these dangers you came?
I'm a daughter of Daniel O'Connell
And from England I have lately come o'er
I have come to awaken my brethren
Who slumber on Erin's green shore.

In transports of joy I awoke then
And found I had been in a dream
For this beautiful damsel had fled me
And I longed for to slumber again
May the heavens above be her guardian
For I know I shall see her no more
May the sunbeams of glory shine o'er her
As she strays along Erin's green shore. 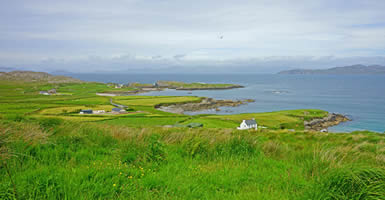 Brief: The story of a man who had a dream about a fair maiden who had come back from England and seemed troubled as she "sighed for the wrongs of her country", while walking along the green shores of Ireland. She was warning him of the dangers that were to follow... "I have come to awaken my brethren, who slumber on Erin's green shore." The history of Ireland and the long battle for freedom and emancipation from England lay testament to this song.

References:
Erin - ancient and poetic name of Ireland.
Daniel O'Connell - Irish political leader in the first half of the 19th century who campaigned for Catholic emancipation, including the right for Catholics to sit in the Westminster Parliament, which had been denied for over 100 years, and to repeal of the Act of Union which combined Great Britain and Ireland.

Erin's Green Shore by Mick Moloney is featured on the album Far From The Shamrock Shore (Feb 12, 2002).

One evening, so late, as I rambled
On the banks of a clear purling stream,
I sat myself down on a bed of primroses,
And so gently fell into a dream.
I dreamt I beheld a fair female,
Her equals I ne'er saw before,
As she sighed for the wrongs of her country,
As she strayed along Erin's green shore.

I quickly addressed this fair female,
"My jewel, come tell me your name,
For here in this country, I know, you're a stranger
Or I would not have asked you the same."
She resembled the Goddess Of Liberty,
And of freedom the mantle she wore,
As she sighed for the wrongs of her country,
As she strayed along Erin's green shore.

“I know you're a true son of Granue,
And my secrets to you I'll unfold;
For here in the midst of all dangers,
Not knowing my friends from my foes,
I'm the daughter of Daniel O'Connell,
And from England I lately come o'er,
I've come to awake my brethren
That slumber on Erin's green shore."

Her eyes were like two sparkling diamonds
Or the stars of a cold frosty night;
Her cheeks were two blooming roses,
And her teeth of the ivory so white.
She resembled the Goddess of Freedom,
And green was the mantle she wore
Bound 'round with the shamrock and roses
That grew along Erin's green shore.

Back to Irish Lyrics E