I'll Walk Beside You lyrics 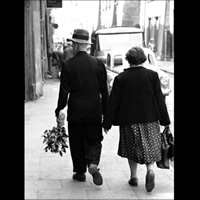 I'll walk beside you... forever

Brief: A love story... the power of love as two people walk through life together, 'through days of cloud and sunshine, joy and tears' - even death will not tear us apart... I'll walk beside you to the golden land.

References:
eventide - poetic word for evening.
I'll Walk Beside You - also the name of a 1943 British Drama Film. The song was played over the opening credits and repeated throughout the film.

Luka Bloom: Born Kevin Barry Moore in Newbridge, County Kildare, Ireland on May 23, 1955. He is an Irish folk-rock singer-songwriter who has been performing since 1969, and is also the younger brother of Christy Moore - one of Ireland's greatest Irish Folk Singers... more

Cherish the Ladies: Originating from New York City, Cherish the Ladies are an all-female super group specializing in Celtic Music with a mixture of vocal and instrumental tracks. The band leader Joanie Madden plays flute and tin whistle while other band members play a wide variety of instruments. Many past members have gone on to achieve international fame in their own right... Eileen Ivers, Winifred Horan of Solas, Cathie Ryan, Heidi Talbot, Liz Knowles, Aoife Clancy, and Deirdre Connolly... more

I'll Walk Beside You by Luka Bloom & Cherish The Ladies is featured on the album The Girls Won't Leave The Boys Alone (Feb 6, 2001).

Back to Irish Lyrics - I