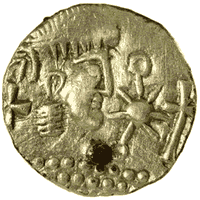 The following is an excerpt from WordReference.com in relation to the Saxon Shilling:

To "take the King's Shilling" in England was to enlist as a soldier in the army, once upon a time. The shilling, equivalent to £0.05 in modern currency, was an inducement to enlist.

In Ireland, of course, the English King was not recognised/acknowledged. So when an Irish man enlisted in the English Army, he was said to have taken the Saxon Shilling...

In the poem given, it is clear that the writer considers anyone who accepted the money was traitor and bad person.

References:
Saxons - Anglo Saxons
Shilling - former monetary unit of the United Kingdom - the 20th part of a pound, equal to 12 pence: discontinued after decimalization in 1971.
asunder - into parts or pieces
spurn - to reject with contempt.
Riband - a ribbon, especially one awarded for some achievement
starveling - one that is starving or being starved.

Hark! a martial sound is heard
The march of soldiers, fifing, drumming;
Eyes are staring, hearts are stirr'd
For bold recruits the brave are coming.
Ribands flaunting, feathers gay
The sounds and sighs are surely thrilling,
Dazzl'd village youths to-day
Will crowd to take the Saxon Shilling.

Ye, whose spirits will not bow
In peace to parish tyrants longer
Ye, who wear the villain brow,
And ye who pine in hopeless hunger
Fools, without the brave man's faith
All slaves and starvelings who are willing
To sell yourselves to shame and death
Accept the fatal Saxon Shilling.

Ere you from your mountains go
To feel the scourge of foreign fever,
Swear to serve the faithless foe
That lures you from your land for ever!
Swear henceforth its tools to be
To slaughter trained by ceaseless drilling
Honour, home, and liberty,
Abandon'd for a Saxon Shilling.

Go—to find, 'mid crime and toil,
The doom to which such guilt is hurried;
Go—to leave on Indian soil
Your bones to bleach, accurs'd, unburied!
Go—to crush the just and brave,
Whose wrongs with wrath the world are filling;
Go—to slay each brother slave,
Or spurn the blood-stained Saxon Shilling!

Irish hearts! why should you bleed,
To swell the tide of British glory
Aiding despots in their need,
Who've changed our green so oft to gory?
None, save those who wish to see
The noblest killed, the meanest killing,
And true hearts severed from the free,
Will take again the Saxon Shilling!

Irish youths! reserve your strength
Until an hour of glorious duty,
When Freedom's smile shall cheer at length
The land of bravery and beauty.
Bribes and threats, oh, heed no more
Let nought but Justice make you willing
To leave your own dear Island shore,
For those who send the Saxon Shilling.

Back to Irish Lyrics S
Back to THE DUBLINERS