The cold winds from the mountain are calling soft to me,
The smell of scented heather brings bitter memories.
A wild and lonely eagle up in the summer sky,
Flies high o'er Shanagolden, where my young Willie lies.

I met him in the winter time when snow was on the ground
The Irish hills were peaceful and love was all around.
Scarcely twenty one years, a young man in his prime.
We were married, darling Willie by the eve of Christmas time.

Do you remember darlin', when we walked the moonlit road
I held you in my arms, love, I would never let you go.
Our hands they were entwined love, all in the pale moonlight,
By the fields of Shanagolden on a lonely winter's night.

Then came the call to arms dear, and the hills they were aflame.
Down from the silent mountains, the Saxon strangers came.
I held you in my arms love, my young heart wild with fear,
By the fields by Shanagolden, in the springtime of the year.

You fought them, darling Willie, all through the summer days.
I heard the rifles firing in the mountains far away
I held you in my arms love, your blood ran free and bright,
And you died in Shanagolden, on a lonely summer's night.

Oh but that was long ago dear, and your son grows fine and tall;
The hills they are at peace again: the Saxon strangers gone.
We'll place the red rose on your grave, by the silvery pale moonlight,
And we'll dream of Shanagolden, on a lonely winter's night. 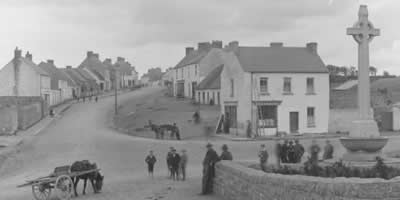 Author: Seán McCarthy (1923–1990) - Irish songwriter from Finuge, County Kerry, Ireland. He was one of 10 children who penned some of Irelands favourite ballads including, Step It Out Mary, Red Haired Mary and In Shame Love, In Shame.

The song shares the same tune as I Gave My Love A Cherry, and The Twelfth of Never.

Brief: The following is a comment by John O'Connor from a YouTube entry in relation to the song:


I always think that this song is one that should be preserved and sung because it is about our freedom... This song is about the time when our country was overrun by Black-and-Tans.

The song tells of a young woman who mourns the loss of her partner Willie, who fought and died for Irish Independence through these troubled times. Years later she laments his loss along with their fine strong son - knowing that the Saxon strangers have gone and they are at peace again.

References:
Shanagolden - a small village located in County Limerick, Ireland.
Saxon - a native of England, or person of English descent, esp. as opposed to an inhabitant of the British Isles of Celtic descent.

Shanagolden by Liz Madden is featured on the album My Irish Home (Nov 01, 2009)

Back to Irish Lyrics - S