There's a sweet garden spot in our memory
It's the place we were born and reared
'Tis long years ago since we left it
But return there we will if we're spared
Our friends and companions of childhood
Would assemble each night near the store
Round Dan Murphy's shop, oh how often we sat
On the stone that stood outside his door

Brief: The song reminisces of a meeting place where friends and companions would come together. Dan Murphy would come out of his store and play the fiddle while his daughters looked after the store. The children would play, and people would sing and tell stories of days gone by; their hardships, their sorrow and their joy. It would all happen at the Stone Outside Dan Murphy's Door... they were memories that would always be cherished. 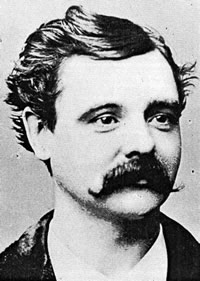 Johnny Patterson had many talents, including singing, song-writing and circus entertaining. At an early age he learned to play a number of instruments including the piccolo and the drums.

When he was 14, he enlisted in the army which was based in Limerick in the mid-west of Ireland. When the circus came to town, he managed to get a part-time job in the band. His earnings enabled him to leave the army, whereby he received an extended contract with the circus band being billed as The Irish Singing Clown.

He worked for a number of circuses around Ireland, and then travelled to England where he played the drums in a circus band from 1865 - 1889. He was a very talented singer and entertainer and spent several years performing around England, Scotland and Ireland where he began to write his own songs.

In 1876, he was given a contract to perform in America, leaving his wife and family behind. His career was truly in full swing, and he was considered to be one of the most famous entertainers of his time. It was during this time that he wrote The Stone Outside Dan Murphy's Door, along with a number of other songs.

He had found fame and fortune, and at the age of 45 decided to return to Ireland, settling in Belfast and re-uniting with his family. In 1886, his wife Selena died. He continued to perform and decided to set up his own circus with an Australian by the name of Joe Keeley. He re-married in 1888 to a girl named Bridget Murray.

As an entertainer, he loved to bring joy and happiness to the lives of people. It was during one of his performances that he expressed his desire to see Catholics and Protestants living in peace and harmony. A fight ensued whereby Patterson was kicked and

The Stone Outside Dan Murphys Door, by Foster & Allen is featured on the album Remember You're Mine (Jan 01, 1988)