I must away now, I can no longer tarry
This morning's tempest I have to cross
I must be guided without a stumble
Into the arms I love the most

And when he came to his true love's dwelling
He knelt down gently upon a stone
And through her window he's whispered lowly
Is my true love within at home?

I must away now, I can no longer tarry
This morning's tempest I have to cross
I must be guided without a stumble
Into the arms I love the most 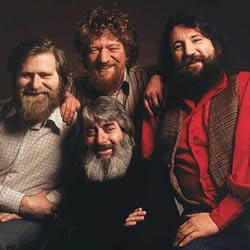 Brief: The song is about a young man who comes visiting at his love's window, pleading with her to let him in as it was a wild and stormy night and he was tired and drenched to the skin. Upon entering, they embrace and spend the rest of the night locked in each others arms. At daybreak, it was time for him to leave - he took his lovers hand as they kissed and parted. He then saddled his horse and rode away.

Noteworthy: In December 1983, "The Night Visiting Song" would become the final song to be performed by Luke Kelly with The Dubliners on Irish television (see video above).

Kelly's health had deteriorated in the 1970s and on June 30, 1980, he collapsed on stage during a concert and was subsequently diagnosed with a brain tumor. He continued performing but his health continued to deteriorate and he finally succumbed on Jan 30, 1984.

He was buried in Galvanise Cemetery, Dublin, where his gravestone bears the inscription: Luke Kelly – Dubliner.

The Night Visiting Song Opens in new window   by The Dubliners ft. Luke Kelly is featured on the album The Performer (Nov 18, 2005 )

Back to Irish Lyrics T
Back to THE DUBLINERS