If We Only Had Old Ireland Over Here lyrics 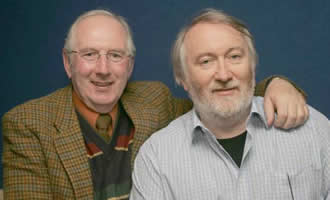 References:
blarney - clever, flattering, or coaxing talk
Blarney Stone - a block of bluestone built into the battlements of Blarney Castle, Blarney in 1446, approximately 8 kilometres (5 miles) from Cork, Ireland. According to legend, kissing the stone bestows the kisser with the gift of great persuasive language skills.
Erin - Ireland
green flag - Irish flag
Sydney, Melbourne, Brisbane, Adelaide - capital cities in Australia
Botany Bay - a bay on the South East coast of Australia, near Sydney.
Fremantle - a port in SW Western Australia, on the Indian Ocean.
Shandon - a district in Cork
Shannon River - longest river in Ireland.
Killarney - a town in County Kerry in the south west of Ireland.
County Cork - a county in Ireland located in the South-West Region and is also part of the province of Munster.

If We Only Had Old Ireland Over Here by Foster & Allen is featured on the album Greatest Hits and Some That Will Be (Jan 1, 1999)

Back to Irish Lyrics - I
Back to FOSTER&ALLEN