by The Clancy Brothers

'Twas down by Brannigan's Corner, one morning I did stray
I met a fellow rebel, and to me he did say
"We've orders from the captain to assemble at Drumbar
But how are we to get there, without a motor car?"

"Oh, Barney dear, be of good cheer, I'll tell you what we'll do
The Specials they are plentiful and the IRA are few
We'll send a wire to Johnson to meet us at Stranorlar
And we'll give the boys a bloody good ride in Johnson's Motor Car.

When Doctor Johnson heard the news he soon put on his shoes
He says this is an urgent case, there is no time to lose
He then put on his castor hat and on his breast a star
You could hear the din all through Glenfin of Johnson's motor car.

But when he got to the railway bridge, some rebels he saw there
Old Johnston knew the game was up, for at him they did stare
He said "I have a permit, to travel near and far"
"To hell with your English permit, we want your motor car."

"What will my loyal brethren think, when they hear the news
My car it has been commandeered, by the rebels at Dunluce?"
"We'll give you a receipt for it, all signed by Captain Barr
And when Ireland gets her freedom, you'll get your motor car.

"Well we put that car in motion and filled it to the brim
With guns and bayonets shining which made old Johnson grim
And Barney hoisted a Sinn Féin flag, and it fluttered like a star
And we gave three cheers for the IRA and Johnson's Motor Car. 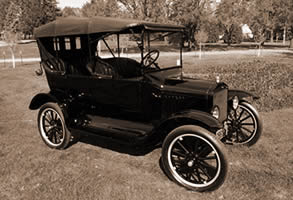 Writer: Willie Gillespie (1920's) - a local poet who wrote a light-hearted account of an event in Donegal involving the IRA.

Versions: Over the years many popular versions have replaced Johnston with Johnson as depicted by this version by The Clancy Brothers. The Dubliners use 'Johnson' while Flying Column use the original name of 'Johnston'.

Brief: The following is an excerpt from Wikipedia.

The song is based on a real event in 1920. An Irish Republican Army unit needed transport to a town over fifty miles away, but had no car to carry them. They decided to call out Henry Johnston, the local doctor, and then ambush him and his car at a railway bridge and commandeer the car for the IRA. He was sent a telegraph - Johnston received a telegraph asking him to attend to a Mrs. Boyle. On his way there, he found the Reelin Bridge barricaded by the IRA, who forced him to give them his car.

Back to Irish Lyrics J-K
Back to The CLANCY BROTHERS