Kelly The Boy From Killane lyrics

What's the news, what's the news oh my bold Shelmalier
With your long barrelled guns from the sea
Say what wind from the south brings a messenger here
With the hymn of the dawn for the free
Goodly news, goodly news do I bring youth of Forth
Goodly news shall you hear Bargy man
For the boys march at dawn from the south to the north
Led by Kelly the boy from Killane

But the gold sun of freedom grew darkened at Ross
And it set by the Slaney's red waves
And poor Wexford stripped naked, hung high on a cross
With her heart pierced by traitors and slaves
Glory-o, glory-o to her brave sons who died
For the cause of long down trodden man
Glory-o to Mount Leinster's own darling and pride
Dauntless Kelly the boy from Killane 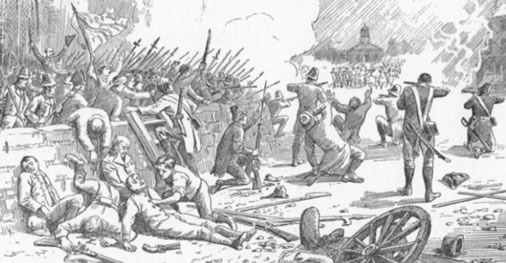 Brief: The story of John Kelly from Killane, a United Irish leader who fought in the Irish Rebellion Of 1798. After a long battle, Kelly was wounded and moved to Wexford to recuperate. Subsequently, the town of Wexford fell to the British and Kelly was tried and sentenced to death by hanging on the 25th June, 1798. His body was then de-capitated and thrown into the River Slaney while his head was kicked through the streets before being set on a spike for all to see.

Album: Kelly The Boy From Killane is featured on the album - The Very Best Of The Clancy Brothers & Tommy Makem (Oct 31, 1997)

Back to Irish Lyrics J-K
Back to MAKEM & CLANCY