Oh then fare thee well sweet Donegal
The Rosses and Gweedore,
I'm crossing the main ocean
Where the foaming billows roar,
It breaks my heart from you to part
Where I spent many happy days.
Farewell to kind relations
I am bound for Amerikay.

Oh then Mary you're my heart's delight
My pride and only care,
It was your cruel father
Would not let me stay there,
But absence makes the heart grow fond
And when I am over the main,
May the Lord protect my darling girl
'Till I return again.

And I wish I was in sweet Dungloe
And seated on the grass,
And by my side a bottle of wine,
And on my knee a lass,
I'd call for liquour of the best,
And I'd pay before I would go,
And I'd roll my Mary in my arms,
In the town of sweet Dungloe. 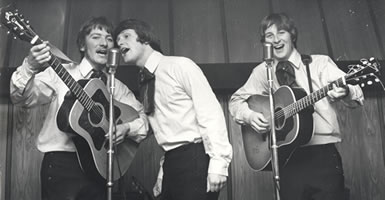 Brief: An Irish song telling a tragic story of love and heartbreak. Here is an excerpt from Wikipedia:

The original 'Mary' in question is said to be a Mary Gallagher, a native of Dungloe. She was courted by a man (from the Gweedore area) who had just returned from the United States but her parents refused to let them marry and he left to return to the US on October 6, 1861. On December 5, 1861 she emigrated to New Zealand to join her relatives there. On the boat she met and married Dónal Egan. She gave birth to a baby but died within four months while her son only survived a few more months.

Album: Mary From Dungloe by Emmet Spiceland is featured on the album The Land I Love so Well... (1 Mar 2006)

Back to Irish Lyrics M