In the County Tyrone, near the town of Dungannon,
Where many's a ruction myself had a hand in.
Bob Williamson lived, a weaver by trade,
And all of us thought him a stout Orange blade,
On the Twelfth of July as it yearly did come,
Bob played with his flute to the sound of a drum.
You may talk of your harp, your piano or lute,
But there's none could compare with the Old Orange Flute.

But Bob the deceiver, he took us all in;
He married a Papist called Bridget McGinn.
Turned Papist himself and forsook the old cause
That gave us our freedom, religion and laws.
Now, the boys of the place made some comment upon it,
And Bob had to fly to the province of Connaught.
He fled with his wife and his fixings to boot,
And along with the latter his Old Orange Flute.

Bob jumped and he stared and then got in a flutter
And he threw the old flute in the blessed holy water.
He thought that this charm would bring some other sound;
When he tried it again, it played "Croppies Lie Down."
And for all he would whistle and finger and blow,
To play Papish music he found it no go.
"Kick the Pope" and "Boyne Water" it freely would sound,
But one Papish squeak in it couldn't be found.

At the council of priests that was held the next day
They decided to banish the old flute away.
They couldn't knock heresy out of it's head,
So they bought Bob a new one to play in it's stead.
Now the old flute was doomed and its fate was pathetic
'Twas fastened and burned at the stake as heretic.
As the flames soared around it, they heard a strange noise;
'Twas the old flute still whistling "The Protestant Boys."

"Too-ra-lay, too-ra-lee"
Ah at six miles from Bangor to Donaghadee. 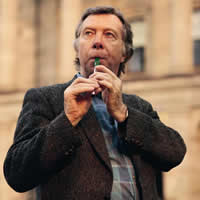 Brief: The story of a Protestant man called Bob Williamson - a weaver from Dungannon who married a Catholic girl by the name of Brigid McGinn. Bob loved to play his flute and with all the rumblings around town concerning his marriage, he took his wife and his flute and fled to Connacht. He attended the Catholic Church and joined the church choir, but when he played his flute it would only play Protestant songs such as The Protestant Boys, Croppies Lie Down, Kick the Pope and The Boyne Water. The Church Council decided to buy him a new flute while the old flute was considered a heretic and condemned to burn at the stake. It was fastened and burned, and as the flames soared around it, you could still hear the flute whistling "The Protestant Boys".

The Old Orange Flute by Tommy Makem is featured on the album Songbag (Jan 1, 1990).