The Shoals Of Herring lyrics

With our nets and gear we're farin'
On the wild and wasteful ocean.
It's there on the deep that we harvest and reap our bread
As we hunt the bonnie shoals of herrin'

O the work was hard and the hours were long
And the treatment, sure it took some bearin'
There was little kindness and the kicks were many
As we hunted for the shoals of herrin'

Now you're up on deck, you're a fisherman
You can swear and show a manly bearin'
Take your turn on watch with the other fellas
While you're following the shoals of herrin'

Well I earned me keep and I paid me way
And I earned the gear that I was wearin'
Sailed a million miles, caught ten million fishes
We was following the shoals of herrin' 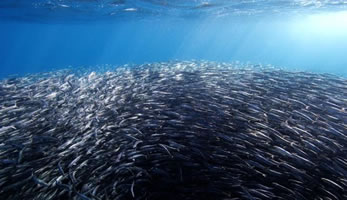 A Shoal of Herrings

Brief: The song is about the life of a fisherman. It was based on the life of Sam Larner, a fisherman and traditional singer from Winterton, Norfolk, England.

References:
Yarmouth - also known as Great Yarmouth, is a coastal Town on Norfolk, England
Swarth and the Broken Bank - fishing grounds
cran - a measure of herrings
Canny Shields - North Shields on the Tyne
Dover Strait - is the strait at the narrowest part of the English Channel, marking the boundary between the Channel and North Sea, separating Great Britain from continental Europe.
Faroe Islands an island chain between the Norwegian Sea and the North Atlantic Ocean, approx. halfway between Norway and Iceland, 320 kilometres / 200 miles north-northwest of Great Britain.
Shoal - school of fish
fellas - fellows

The Shoals Of Herring by Ewan MacColl from the album Black And White (Nov 19, 1996)