When winter was brawling, o'er high hills and mountains
And dark were the clouds o'er the deep rolling sea
I spied a wee lass as the daylight was dawning
She was asking the road to sweet Carnlough Bay

Said I, my wee lassie, I canna weel teIl ye
The number of miles or how far it may be
But if you'll consent I'll convoy you a wee bit
And I'll show you the road to sweet Carnlough Bay

You turn to the right and pass down by the churchyard
Cross over the river and down by the sea;
We'll call at Pat Hamill's and have a wee drop there
Just to help us along to sweet Carnlough Bay 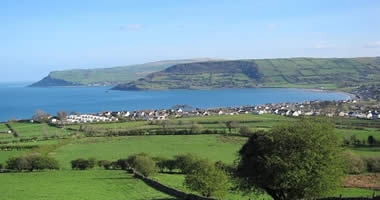 Brief: On a cold windy night a woman asks a man the way to Dundee. He tells her the directions are a little hard to explain, but he will show her the way. He takes a liking to her and on the way they stop for a drink at a pub. Although they never meet again, he will always remember her with regret it seems as he warns other young men who will listen - "Not to turn their backs on any wee lassie when she asks for directions to sweet Carnlough Bay".

The following is a comment made by Mary McKay - a direct ancestor of Richard McKay. She was a guest at Mudcat.Org where there was a discussion in relation to the author of the song:


I know who the Poet McKay is. He was Richard McKay born Armagh 1800 and died in Blairgowrie Scotland in 1897 . He was a direct ancestor of mine. According to my family he also wrote The Road and the Miles to Dundee the Scottish version of Sweet Carnlough Bay. We were also given to believe he also wrote Come All Ye Tramps And Hawker Lads and others. He was a hawker himself as were most of my ancestors at that time.

References:
Carnlough Bay - a village in County Antrim, Northern Ireland.
canna - cannot
weel - well
Pat Hamill's - a pub - apparently the pub is still there but is called something else.
hawker - a person who travels from place to place selling goods

Back to Irish Lyrics - S
Back to THE WOLFE TONES