Sure I am a Westmeath bachelor, and me age is 63,
I don't intend to marry, or to raise a family.
Sure I'm happy and contented just to live a single life.
And that's the reason why I don't intend to take a wife.

[Chorus]
With the red stuff on her fingernails, and varnish on her toes,
The raddle on her old fizzhog and the whitewash on her nose
She can get a fancy barber to shave her neck her head
Well that's why I'm a bachelor and I don't intend to wed.

Last Thursday at the market in the town of Mullingar,
A friend he introduced me to a famous movie star,
She was married several times before to men of every creed
And she thought she had a sucker in the bachelor from Westmeath

Now I'm living with me brother, and his little cat and dog,
I'm earnin' seven and six a week, a-workin' on the bog,
Why should I change this life of ease, for one of struggle and strife,
And that's the reason why I don't intend to take a wife.

Now I'm living with me brother, and his little cat and dog,
I'm earnin' seven and six a week, a-workin' on the bog,
Why should I change this life of ease, for one of struggle and strife,
And that's the reason why I don't intend to take a wife.

Hi Janice I am writing this email to you about the composer of the Westmeath Bachelor song. I know the composer of this song and it is not Bill Whelan as mentioned who was born in 1950 but it is another Whelan from Castletown-Geoghegan in Co. Westmeath, a brilliant traditional Irish musician and his name is William Whelan or as he was known by everyone who knew him as Billy. He died in 1989 and Foster and Allen as you mentioned would have known him. In his younger days he played the banjo with the Moate Ceili Band. I had the honour of knowing him as a child and he was one of life's true gentlemen.

Dan also sent me this photograph of the Moate Ceili Band where their profile described them as an Irish band from the town of Moate between Dublin and Athlone that had been broadcasting on the radio as early as 1932.

Brief: A humorous story about a man from Westmeath who wants a simple and happy life without struggle and strife... the answer to that is a single life with no intention of marriage or raising a family. 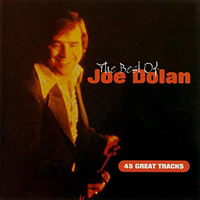 Joe Dolan: Born Joseph Francis Robert Dolan on 16th Oct, 1939 in Mullingar, Ireland. He was an Irish entertainer, recording artist, and pop singer. He was given the nickname of "The Roaring Hyena" because of his high singing voice. He was active from 1958 - 2007 and his music styles included pop, rock and country. He died on Dec 26, 2007 after a long bout of ill health finally succumbing to a massive intra-cerebral haemorrhage.

References:
Westmeath - a county in Ireland in the province of Leinster and part of the Midlands Region
raddle - a type of heavy makeup, crimson mostly, favoured by actresses and ladies of a certain profession
fizzhog - a person's face or expression
bog - wet muddy ground

Album The Best of Joe Dolan.

Back to Irish Lyrics - W