At Boolavogue as the sun was setting
O'er the bright May meadows of Shelmalier,
A rebel hand set the heather blazing
And brought the neighbours from far and near.

Then Father Murphy from old Kilcormack
Spurred up the rocks with a warning cry:
'Arm! Arm!' he cried, 'For I've come to lead you;
For Ireland's freedom we'll fight or die!'

He led us on against the coming soldiers,
And the cowardly yeomen we put to flight:
'Twas at the Harrow the boys of Wexford
Showed Bookey's regiment how men could fight.

Look out for hirelings, King George of England;
Search every kingdom where breathes a slave,
For Father Murphy of County Wexford
Sweeps o'er the land like a mighty wave.

We took Camolin and Enniscorthy
And Wexford storming drove out our foes
'Twas at Slieve Coilte our pikes were reeking
With the crimson blood of the beaten Yeos.

At Tubberneering and Ballyellis
Full many a Hessian lay in his gore,
Ah! Father Murphy had aid come over
The green flag floated from shore to shore!

At Vinegar Hill, o'er the pleasant Slaney
Our heroes vainly stood back to back,
and the Yeos at Tullow took Father Murphy
and burned his body upon a rack.

God grant you glory, brave Father Murphy
And open Heaven to all your men,
The cause that called you may call tomorrow
In another fight for the Green again. 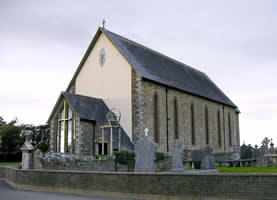 Brief: The song was written as a commemoration to the Irish Rebellion of 1798. It relates the events leading up to the battle where the local parish priest Father John Murphy rallied his parishioners leading them into battle on May 26th, 1978. On June 21st Father Murphy and the rebel leaders were killed but the battle continued on for up to five years... more.

References:
Boolavogue - a village 12 kilometers northeast of Enniscorthy in County Wexford, Ireland, residing in the Roman Catholic Diocese of Ferns
Yeomen - English peasantry of the 14th to 18th centuries who carried on the independent cultivation of lands that were their traditional hereditary possessions.
Yeos - short for Yeomen.
hirelings - mercenaries - people who only work for pay