Dawning of the Day lyrics

Then I called my men to follow me
Knowing well that the view was dim
Though tired and worn, how they fought all morn'
As time was closing in
And my heart was sad but sore with pride
For brave lads all were they
For as angels fly, how they climbed so high
On the dawning of the day

But the edge is moving nearer now
Inside the fading sun
And calling, calling out to them
My brothers, one by one
But only dusty silence sounds
The ashes float away
As the twilight ends and the night descends
'Til the dawning of the day

Forgive me love, I'm going now
So very far away
When darkness falls, only think me near
And do not be afraid
And please don't grieve that I am gone
Abide in what remains
'Til the shadows end and we meet again
On the dawning of the day

For when shadows end, we shall meet again
On the dawning of the day 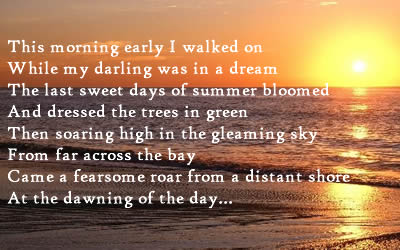 Versions: There are other songs with lyrics set to the same tune, including Fáinne Geal an Lae published by Edward Walsh in 1847 (later translated into English as The Dawning of the Day, published by Patrick Weston Joyce in 1873), and Patrick Kavanagh's song, On Raglan Road.

Brief: A love song about a soldier leaving his home and everything dear to him to fight in a war, and the impending tragedy of lives lost and hearts broken. He asks that she not grieve for him and appreciate what she has left... "and please don't grieve that I am gone - abide in what remains".

Mary Fahl: Born Mary Faldermeyer on July 1, 1958 in Rockland County, NY, U.S. to Irish/German parents. She is a singer/songwriter, guitarist and actress. She was associated with the band, October Project from 1990-1996 and then pursued a solo and acting career from 2001 to the present.

Recorded: by Mary Fahl in 2013 on the album Love & Gravity