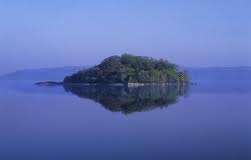 Brief: Farrelly wrote the song while on a bus trip to Dublin, from Kells in County Meath where he lived. The song is about an Irish emigrant who expresses his love and longing for his native land.

The song was first published in 1950. It has been used as a principal theme to the movie 'The Quiet Man', and has been used in the soundtracks of several other films including, Distant Voice (1988), Still Lives (1988), and Breakfast On Pluto (2005)... more

Featured Artist: This beautiful rendition of the song is performed by singer/harpist, Orla Fallon - formerly from Celtic Woman.

Isle Of Innisfree by Orla Fallon is featured on the album My Land (March 1, 2011).

Back to Irish Lyrics - I