The Streets Of New York lyrics

I was 18 years old when I went down to Dublin
With a fistful of money and a cartload of dreams
"Take your time" said me father, stop rushing like hell
And remember all is not what it seems to be.
For there's fellas would cut ye for the coat on yer back
Or the watch that you got from your mother
So take care me young bucko and mind yourself well
And will ya give this wee note to me brother

At the time Uncle Benjy was a policeman in Brooklyn
And me father the youngest, looked after the farm
When a phone call from America said, 'Send the lad over'
And the old fella said 'Sure it wouldn't do any harm'
For I've spent my life working this dirty old ground
For a few pints of porter and the smell of a pound
And sure maybe there's something you'll learn or you'll see
And you can bring it back home make it easy on me

Well to shorten the story what I found out that day
Was that Benjy got shot down in an uptown foray
And while I was flying my way to New York
Poor Benjy was lying in a cold city morgue.
Well I phoned up the old fella told him the news
I could tell he could hardly stand up in his shoes
And he wept as he told me, 'Go ahead with the plan
And not to forget be a proud Irish man'.

So I went up to Nellies beside Fordham road
And I started to learn about lifting the load
But the heaviest thing that I carried that year
Was the bittersweet thoughts of my hometown so dear.
I went home that December 'cause the old fella died
Had to borrow the money from Phil on the side
And all the bright flowers and brass couldn't hide
The poor wasted face of me father.

I sold up the old farmyard for what it was worth
And into my bag stuck a handful of earth
Then I boarded a train and I caught me a plane
And I found myself back in the US again.
It's been 22 years since I've set foot in Dublin
Me kids know to use the correct knife and fork
But I'll never forget the green grass and the rivers
As I keep law and order in the streets of New York. 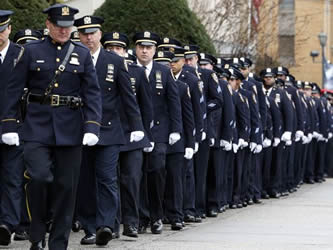 Funeral of a NYPD Police Officer.

Brief: The song is associated with the emigration of generations of Irish folk - the story of a young man raised on a farm, and at the age of 18 went to Dublin with a 'fistful of money and a cartload of dreams' eagerly wanting to travel and experience life. An opportunity arose when his Uncle Benjy sent for him to join him as a police officer in Brooklyn, New York. On his way there he learned that his Uncle had been shot dead in the line of duty. He rang his father with the distressing news and was told to 'Go ahead with the plan and not to forget, be a proud Irish man'... he stayed in New York and became a police officer. He returned home when his father died, sold the farm and returned to New York raising a family and continuing his work there. He often looks back and reminisces about the green grass, the rivers and his beloved homeland.

The Emerald Society - an organization of American police officers or fire fighters of Irish heritage have adopted the song as their anthem which is played at births, christenings, funerals and other special occasions.

Charts: The Wolfe Tones Reached No. 1 on the Irish Singles Chart in 1981 remaining there for 26 weeks.

The Streets Of New York is featured on the album The Wolfe Tones: The Greatest Hits (March 07, 2000)

Back to Irish Lyrics S
Back to The WOLFE TONES