The Dutchman's not the kind of man
To keep his thumb jammed in the dam that holds his dreams in
But that's a secret only Margaret knows
When Amsterdam is golden
In the morning Margaret brings him breakfast, she believes him
He thinks the tulips bloom beneath the snow
He's mad as he can be but Margaret only sees that sometimes
Sometimes she sees her unborn children in his eyes

The windmills whirl the winter in
As she winds his muffler tighter, they sit in the kitchen
And the tea with whiskey keeps away the dew
He sees her for a moment
Calls her name, she makes the bed up humming some old love song
She learned it when the tune was very new
He hums a line or two, they hum together in the night
The Dutchman falls asleep and Margaret blows the candle out 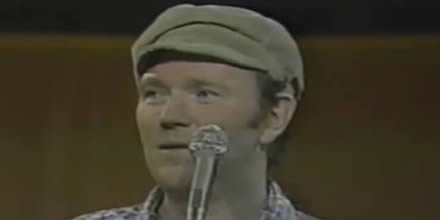 Special thanks to Raymond Sparkman for alerting me to the backstory video by Michael Smith of how Liam Clancy came to record the song.

Brief: The song is about an elderly couple living in Amsterdam... Margaret and the Dutchman. He has become senile over the years but Margaret's love for him is undying. She remembers special moments with glimpses of happier times, yet there is a certain sadness she feels over what has become of him over the years. Beautiful lyrics - beautiful song.

Popularized by: Steve Goodman on the album, Somebody Else's Troubles in 1973.

P.S. Although this is not strictly an Irish Song, it has been adopted by several Irish artists and their versions are outstanding especially the one by our featured artist - Liam Clancy... he owns it!

Back to Irish Lyrics T
Back to LIAM CLANCY