Dublin In My Tears lyrics

by The Dublin City Ramblers

I have travelled many lands and I still don’t understand
How sad you have become on my return
Your poor heart is filled with care, sad and old they left you there
Your once bright eyes with sorrow, softly burn
I can even sense the change in the sound of children’s games
And the dreams of youths' ambitions have all turned to doubt and fear
It’s an age of wealth I’m told, but I’ve never felt so old
As I recall old Dublin in my tears

All the faces that I meet as I roam each one way street
Reflect the empty statements of the times
And the old cathedral bell can’t be heard above the swell
For the years erase the message in her chimes
All my childhood friends are gone, like the street where we were born
And the time that it has taken, doesn’t seem so many years
They have faded in the gloom, with ‘Sap' Kelly of the Coombe
Just a ghost of dear old Dublin in my tears

There were times when jobs were few, there were hungry days we knew
Some days so bad their memory I’ve cursed
And the prayer I said to God, there onboard the 'Princess Maud'
That our children would restore a pride we lost
But the past we all forsake, as they're dancing at her wake
While the heart of Dublin’s dying, but nobody really cares
And the fools, as they pass by, laugh to see an old man cry
I can’t forget old Dublin in my tears

Gather round brave men and true, though our numbers they be few
We’ll drink one toast before I cross the foam
For soon in London’s dark domain, I’ll recall how I became
No more a stranger there than here at home
Now the Liffey flows along and I listen for her song
And the voice of young James Larkin seems to echo in my ears
But its just the rafters ring, to it’s requiem I’ll sing
Farewell to dear old Dublin in my tears
Farewell to dear old Dublin in my tears 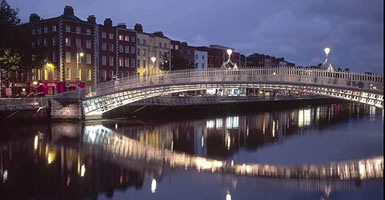 Brief: The song is written from the author's perspective when he returns to his hometown of Dublin and is saddened by the changes that have occured since leaving. The context of the song shares similarities to 'The Rare Old Times'.

References:
‘Sap' Kelly of the Coombe - refers to the author's (Brendon Phelan) grandfather, Jem ‘Sap’ Kelly who lived in Coombe Street in the Liberties area of Dublin City.
Princess Maud - British passenger ship built in 1934. She served as a troop ship throughout the 2nd world war. She was reconditioned after the war and moved to Holyhead where an additional flying bridge was added on the port side only to assist docking. She acted as a spare and relief vessel, running Holyhead-Dun Laoghaire extra sailings throughout the summer, providing relief on other Irish Sea routes while regular vessels were being overhauled.
Liffey - refers to the River Liffey, which flows through the centre of Dublin.
James Larkin - Irish politician

Dublin In My Tears by The Dublin City Ramblers is featured on the album Home and Away (February 2, 1988).