Down by the Salley Gardens lyrics

In a field by the river my love and I did stand,
And on my leaning shoulder she laid her snow-white hand.
She bid me take life easy, as the grass grows on the weirs;
But I was young and foolish, and now am full of tears. 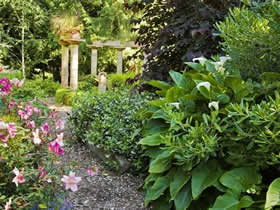 Lyrics: William Butler Yeats wrote the poem 'Down By The Salley Gardens' which was published in 1889. Yeats wrote notes about the origins of the poem, and stated that he tried to rebuild an old song from three lines that an old woman sang to herself - lines that were vaguely remembered.

Music: Traditional - Adapted to the music of 'The Maids of the Mourne Shore' by Herbert Hughes in 1909... more

Orla Fallon: Born Órlagh Fallon on the 24th August, 1974 in Knockananna, County Wicklow, Ireland. She is a singer, harpist whose genres include Celtic, adult contemporary and New Age music, and her previous associations include Anúna and Celtic Woman.

Down by the Salley Gardens by Orla Fallon is featured on the album The Water Is Wide (June 10, 2006).