From Donegal to County Kerry,
From Belfast City to the hills of Derry
We come from Clare, from Meath and Mayo
To work across the ocean

I'm tired of the tears from me mother Katie
I'm fed up of leaving me sister Mary
And me father sayin, "Take it nice and easy.”
When workin' across the ocean 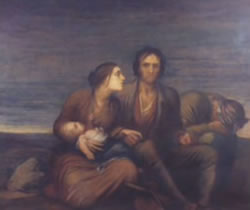 Music & Lyrics: Traditional - This version is adaptation of an old rebel song called Óró sé do bheatha abhaile. The song was originally considered an Irish Folk song, but came to be known as a 'rebel song' in the early 20th century when the nationalist poet, Patrick Pearce added new verses. They were sung by members of the 'Irish Volunteers' during the 'Easter Rising', and as a fast march during the 'The Irish War of Independence'. There have been many adaptaptions to the song since that time and this version by The Fureys is perhaps one of the most popular.

Brief: A song about the hardships endured by the Irish during tough political and economic times, leaving their families and beloved country time and time again to find work on distant shores with a plea to politicians to provide economic stability so they can live and provide for their families at home.

Back to Irish Lyrics O
Back to The FUREYS